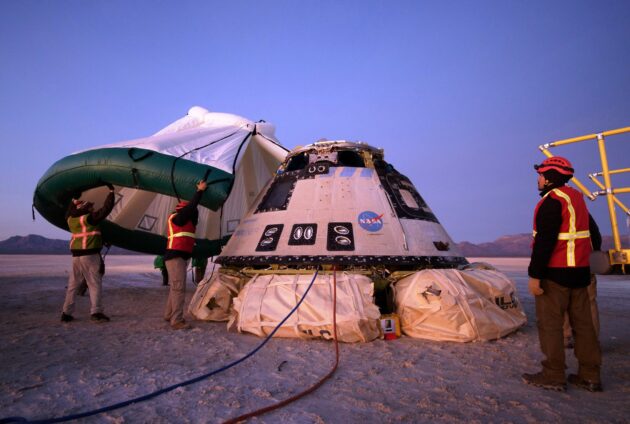 Boeing safely landed its crew capsule in the New Mexico desert after an aborted flight to the International Space Station that could hold up the company’s effort to launch astronauts for NASA next year. The Starliner descended into the Army’s White Sands Missile Range.

“We pinpoint landed it,” NASA Administrator Jim Bridenstine said at a post-landing briefing.

The successful return capped a rocky start to a mission that was supposed to include a docking with the space station. Managers will review all the data before deciding whether to do another test flight or go straight to flying astronauts, said NASA’s Steve Stich.

It was the first American-made capsule designed for astronauts to make a ground landing after returning from orbit. NASA’s early crew capsules Mercury, Gemini and Apollo all had splashdowns. SpaceX’s Dragon capsule, which made its orbital debut last winter with a test dummy, also aims for the ocean at mission’s end.

The capsule’s first trip to space began with a smooth rocket ride from Cape Canaveral, but barely a half hour into the flight, it failed to fire its thrusters to give chase to the space station and ended up in the wrong orbit.

The problem was with the Starliner’s internal clock because it did not sync up with the Atlas V rocket and was off by 11 hours, according to Boeing

The capsule burned so much fuel trying to orient itself in orbit that there wasn’t enough left for a space station rendezvous. Flight controllers tried to correct the problem, but between the spacecraft’s position and a gap in communications, their signals did not get through. They later managed to reset the clock.

Boeing is still trying to figure out how the timing error occurred. The mission lasted nearly 50 hours and included 33 orbits around the Earth about 100 orbits fewer than planned.