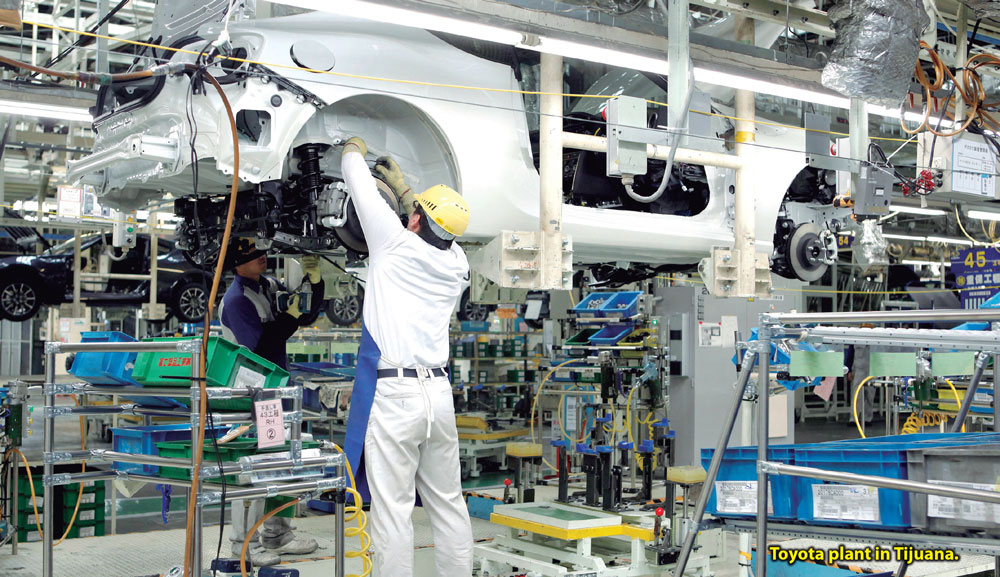 Arecent easing of global trade tensions has not come without critical change involving two of the U.S.’ largest trade partners: Mexico and China.

Talks aimed at easing underlying trade policy differences between the U.S. and Mexico and the U.S. and China concluded earlier this year with two agreements. The United States–Mexico–Canada Agreement (USMCA) replaces the North American Free Trade Agreement (NAFTA), which had been in place since 1994. It sets a new framework for North American regional integration among the three nations.

The U.S.–China Phase One deal included Chinese pledges for the purchase of U.S. farm products, safeguards for intellectual property and the promise of further talks to reduce trade frictions between the two nations. The trade dispute has included successive rounds of tariffs since early 2018.

Taken together, the two agreements present challenges and opportunities for Mexico, both in the short term and long term, with regard to how it will do business—including with Texas that counts its neighbor as its largest trading partner and as a key link in the production of intermediate and finished goods.

USMCA, while opening the possibility of further regional integration in areas such as digital commerce, is more restrictive than NAFTA in other sectors, such as the automotive sector, where lower Mexican output could adversely affect its gross domestic product (GDP). On the other hand, even with the latest agreement between the U.S. and China, ongoing policy differences between the two have prompted trade diversion toward Mexico, which has acquired an increasing share of the U.S. import market.

However, these positive effects of trade diversion may be short lived and come with the cost of higher prices to consumers.

Projections of the economic effects of new trade agreements, particularly of their short-term impact, are tentative given the high level of uncertainty that persists regarding trade policy and global growth. In this sense, rising protectionism across the world and within the North American region is one of the main risks confronting the global economy.

In particular, there is uncertainty regarding the extent of the distortions that measures such as tariffs and non-tariff barriers may pose for global trade, supply chains and the international organization of productive processes. There is also uncertainty about the effects that tariffs and the deterioration in international trade conditions could have on the global economy and investment in the short and medium terms.

Finally, over a longer horizon, greater barriers to trade could lead to a reconfiguration of global value chains to the detriment of aggregate productivity as manufacturing moves away from the efficient allocation of the production of goods and services.

USMCA is more restrictive in some respects than NAFTA, particularly in the automotive sector. Under USMCA, the value of regionally sourced content has increased significantly. Additionally, there are new restrictions regarding the origin of steel, aluminum and vehicle parts used in the production process and new requirements governing labor value content and the wages paid.

Specifically, USMCA stipulates several notable changes in vehicle production. The North American share of the value of automobiles and light trucks produced increases from 62.5 percent under NAFTA to 75 percent under USMCA and from 60 percent to 70 percent for heavy trucks.

Rather than applying NAFTA’s uniform content standard for vehicle parts, USMCA sets separate content requirements (the percentage that must be produced in North America) for three groups: core parts, such as engines and transmissions, 75 percent; principal parts, like electrical and electronic parts, 70 percent; and complementary parts, which include brake systems and miscellaneous parts, 65 percent.

At least 70 percent of the steel and aluminum used in the manufacture of automobiles and light trucks must originate in the U.S., Canada or Mexico.

Notably, requirements for labor value content were introduced in the updated agreement: 40 percent of the materials for automobiles and 45 percent of the content for light trucks must be produced by regional enterprises that pay workers at least $16 per hour. Since Mexican autoworkers currently earn about $7.30 per hour for auto assembly and $3.40 while making automotive parts, this new provision most directly affects Mexico.

The USMCA requirements could make automotive production less efficient and decrease the competitiveness of the automotive industry across the North American region relative to the rest of the world, our estimates show. Using a quantitative general equilibrium trade model—typically used to study the effects of trade reforms on industry—we estimate the effects of the new requirements, comparing USMCA with NAFTA.

In the baseline scenario, more restrictive rules-of-origin requirements will increase production costs that, in turn, will imply higher prices, reduced output and a decrease in consumer surplus in the region. Furthermore, at the regional level, spending on the transport equipment sector will shift away from local producers and toward foreign suppliers of these goods.

There are considerable losses of real output in the transportation manufacturing sector, as the whole region will reduce its output in the sector. While all countries in the region are negatively affected, Mexico stands to sustain the biggest loss both in terms of the absolute number of vehicles produced and GDP. The competitiveness of some assembly operations in Texas could be affected since facilities such as Toyota’s truck plant in San Antonio and the General Motors SUV unit in Arlington rely on Mexican parts.

Opting Out of USMCA Trade

It is also possible that the new auto provisions increase the burden of compliance to the point that firms opt out of using the benefits of the USMCA and prefer, instead, to source their inputs from the leastcost country (not necessarily from North America) and pay the mostfavored-nation (MFN) tariff when exporting. Such a move would hurt regional suppliers. Thus, even in a mildly disruptive scenario, the increase in the rules of origin may increase regional content at the cost of lower North American competitiveness in the automotive industry. In a heavily disruptive scenario, the tougher rules could actually lead to a reduction in the overall regional content in the sector.

Using our model, we estimate the effects that opting out of USMCA could have on the auto sector by considering an MFN opt-in scenario in which all regional trade in the sector faces MFN tariffs. Our estimates imply that this scenario is harsher than our benchmark USMCA scenario, although not drastically so. This suggests the possibility that any further tightening of the rules of origin requirements in the auto sector could create the incentives for firms to opt out of the USMCA as a means of conducting trade within the region.

Trade conflicts between the U.S. and China have also been a factor behind Mexico’s recent export performance. Electrical and optical equipment, machinery, footwear and textiles are among the sectors where the U.S. has imposed high tariffs on China and where Mexico competes with China for market share.

Thus, it is natural to believe that trade diversion could boost Mexican exports in some industries. Since the U.S.– China dispute began, China has lost market share in the U.S., and Mexico has recorded gains . Most of the market share that China lost in the U.S. involved goods subject to higher tariffs—the same set of goods in which Mexico achieved its largest gains of market share in U.S. imports.

It is important to note that some of Mexico’s gains were in sectors in which China did not export to the U.S. Thus, it appears that Mexican exports have benefited from trade diversion, though perhaps not as much as some might have initially expected.

Notice that the declining share of Chinese imports in the U.S. has outpaced Mexico’s gains. In fact, the increases that Mexico has achieved due to trade diversion amount to only one-third of what China lost. Thus, trade diversion has benefited other countries too, as the rest of the world acquired market share in the U.S. In particular, South Korea and Taiwan have also gained considerable presence in the U.S. import market.

Mexico has gained not only in terms of market share of U.S. imports. China’s market share losses positively affected Mexico’s manufacturing production in sectors in which China lost the most.

However, even though Mexico has been able to gain some output from trade diversion, this improvement has come at someone else’s expense since trade diversion entails an efficiency loss.

In this case, it seems that U.S. consumers have borne the loss through higher prices of imports. Mexico has realized higher prices for the type of exported goods that would have faced tariffs had they come from China. Prices for those Mexican exports to the U.S. increased relatively more than the export prices of goods unaffected by the tariffs.

While there is evidence suggesting that Mexico has, at the margin, benefited from trade diversion, these “gains” may be short lived if trade tensions lead to a further slowdown of global economic activity, larger trade distortions and a breakup of global value chains.

Estimates of a counterfactual scenario in which the U.S.–China trade dispute was persistent suggest that both the U.S. and China would sustain real output losses, while Mexico and Canada would increase production, albeit only marginally. However, prices would be much higher, particularly across North America. These higher prices would reduce the gains from globalization for consumers in the region.

The adverse impact on economic activity, trade and investment flows of an evolving and uncertain global trade environment is not surprising. However, calculating the magnitude of this effect is difficult. Mexico as a key U.S. trade partner is, not surprisingly, subject to the crosscurrents of trade tensions between the U.S. and China. These impacts are especially important for Texas, which counts Mexico as its largest trade partner.

Approval of the USMCA, an update to the almost quarter-centuryold NAFTA, could by itself change trade. Indeed, costs especially in the key automotive sector will rise and tend to make North American products potentially less competitive than they might have been over the longer term, depressing Mexico’s GDP.

However, Mexico stands to gain, albeit in the short term, from trade tensions between the U.S. and China and the imposition of retaliatory tariffs that began in 2018. Mexico has been a beneficiary of trade diversion, accounting for a portion of what China previously supplied to the U.S.

The U.S.–China Phase One agreement that called a ceasefire to the dispute and a pledge for further trade talks makes calculating the future benefit to Mexico difficult. The impact of disrupting the production of goods and services and the global value chains that they represent could exacerbate any broader economic slowdown, further trimming Mexico’s shortterm gains and negatively affecting its trading partners.