CBP’s Eyes in the Sky 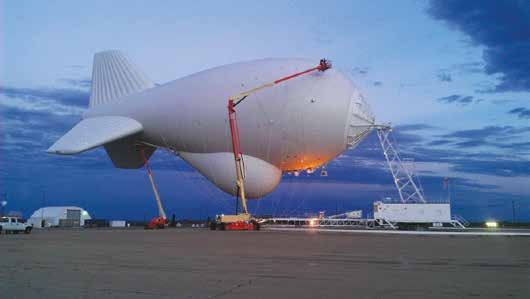 Eyes in the sky stretch over the southern U.S. border at 10,000 feet, from Yuma, Arizona, to Lajas, Puerto Rico. Eight special blimps that are part of the Tethered Aerostat Radar System, or TARS, watch over the southern U.S. border. Each balloon is moored to the ground with a special nylon fiber cable, and raised and lowered with a powered winch. Swaying silently in the breeze, U.S. Customs and Border Protection aerostats are unmanned, unarmed, and spend their service lives hovering over a fixed location on the southern edge of the border.

“TARS is the most cost-efficient capability that we own,” according to Richard Booth, director of domain operations and integration for CBP’s Office of Air and Marine. “TARS is like a low-flying satellite system, but cheaper to launch and operate,” Booth explained.

“The aerostats are aerodynamic balloons and fly like kites in the wind—no one pilots them,” said Rob Brown, CBP program manager for TARS. “Raising radar and other sensors to high altitude boosts surveillance range, and the physical sight of an aerostat is a visual deterrent to illegal activity in the air and on the ground,”explained Brown. Each TARS balloon contains a radar weighing about 2,200 pounds, capable of detecting aircraft at a range of 200 miles.

Each sweep of the radar in the belly of a TARS detects all flying aircraft within the balloon’s 200-mile range. Wireless transmitters send TARS radar data from each balloon into the Internet cloud, where it is combined with other TARS radar data, according to Brown. Radar data is downloaded from the cloud at the Air and Marine Operations Center, AMOC, in Riverside, California. Using the Air and Marine Operations Surveillance System, the AMOC can integrate more than 700 sensor feeds to simultaneously track 50,000 aircraft in flight over the U.S., Mexico, Central America, the Caribbean and South America.

The CBP aerostat program began over 30 years ago when the U.S. Customs Service started using tethered aerostats to counter the rising number of low-flying small aircraft operated by drug smugglers. For years, traffickers moved contraband into the U.S. by air because it was cheap and efficient. Customs authorities estimated that by the early 1980s, as many as 8,500 illegal flights per year were transporting narcotics directly from the Caribbean, Central or South America into the U.S. “The shortest route from the narcotics production areas to U.S. markets is by air,” said Booth. To circumvent ground-based radar, drug smugglers in low-flying aircraft can hide behind terrain features, such as mountains and valleys. Radar installed in an aerostat, however, detects all aircraft within range, including small planes flying low and slow over the border.

In 1978 the U.S. Air Force set up the first TARS site in Cudjoe Key, Florida. A second TARS went into service in 1983 at Fort Huachuca, Arizona. From 1988 to 1991, the U.S. Customs Service established more TARS sites at Yuma, Arizona, and three sites in Texas, including Marfa, Eagle Pass and Rio Grande City. By the end of 1994, additional TARS balloons were floating in Florida, Texas, Puerto Rico and even the Bahamas. The U.S. Air Force managed the TARS program until July 2013, when the program was transferred to CBP.

As each new aerostat went into service, smugglers would relocate flight routes to other areas still undefended by aerostats. However, the impact of the first aerostats was clear, yielding a bonanza of interdictions, arrests and aircraft seizures. Due to the efficiency of TARS and OAM enforcement, the number of unidentified aircraft flying over the border has dwindled from 8,500 to less than 10 per year. Knowing the high likelihood of apprehension if flying across the U.S. border, smugglers now stop short of the border and try to move contraband over land into the U.S. “TARS has enabled CBP to control the air threat, but not eliminate it. The rising number of landings short of the border indicates that smugglers view air as a viable means of transport and are positioned to take advantage if given a chance. We call them ‘shortlanders’,” explained Booth.

In June 2014, TARS detected an unknown aircraft flying without a transponder signal, 65 miles northwest of Hermosillo, Mexico. The AMOC used TARS at Yuma and Fort Huachuca to follow the plane, heading northwest towards the U.S. border. With the assistance of Mexican.

Approximately 44 minutes later, AMOC detected an aircraft with no transponder signal rising into the air from where it had faded from radar. Mexican Air Force planes tracked three trucks departing the area where the mystery plane had landed and a Mexican military helicopter was launched to investigate. Three abandoned trucks were later found, resulting in the seizure of the vehicles and 200 packages of marijuana weighing a total of 2,043.9 kilograms. “Because of TARS, most air smugglers now land well short of the border and run their loads into the U.S. from the ground,” explained Rob Brown.

TARS is the only persistent wide-area air, maritime and land surveillance system specifically designed for CBP’s border security mission. Despite their effectiveness, unmanned aircraft systems are not designed for the same mission. “We cannot have enough UAS’s carrying enough radar to duplicate the persistent ability of TARS to detect low-flying aircraft for 200 miles,” explained Brown.

In 2013, TARS was responsible for detecting 586 suspicious flights, representing 42 percent of all the suspect flights along the Southwest border tracked by AMOC that year.

Traffickers continue to innovate, however, currently increasing the use of ultralight aircraft to fly drugs over the border.

Early in 2014, the AMOC detected an aircraft flying eight miles south of Nogales in Sonora, Mexico, heading north toward the U.S. border. The plane crossed into the U.S. over Nogales, Arizona, still heading north at low level. The Border Patrol confirmed the target as an ultralight that went on to make an airdrop about four miles north of Nogales. Again through TARS radar, AMOC picked up the plane flying south and tracked it until it disappeared from radar in Mexico. Border Patrol agents seized seven bundles of marijuana weighing 159.75 pounds and an abandoned all- terrain vehicle.

Later in 2014, the AMOC used TARS to spot another ultralight circling north of Caborca, Mexico. The AMOC tracked the target as it flew toward the U.S. border. Two CBP aircraft were directed toward the ultralight’s expected border crossing point. The target crossed the U.S. border and continued northeast. CBP flight personnel visually confirmed the target was an ultralight. The AMOC contacted Border Patrol agents at Casa Grande, Arizona, to respond. The AMOC tracked the plane to 10 miles southwest of Eloy, Arizona, where an airdrop was observed. Border Patrol agents on the ground arrested three people and seized 10 packages of marijuana weighing a total of 230 pounds. Controllers at AMOC used TARS to watch the ultralight disappear back over the Mexican border.

The TARS have been located to overlap slightly from one area of coverage to another, like merging circles on a Venn diagram, to ensure unbroken coverage on the southern border.

TARS contributes directly to CBP’s international border security partnership with Mexico. All air routes, clandestine air fields and support infrastructure identified by TARS and the AMOC are provided to Mexico for investigation, increasing U.S. intelligence and ability to disrupt transnational criminals on the border.

Though TARS is economical to operate, the balloons have a limited service life. According to Rob Brown, “every five to six years we are replacing the balloons due to wear and tear, being exposed to ultraviolet radiation, constant sunlight, getting beat up in the wind with sand blowing into them. They are carrying a 1-ton radar, so you can expect a fair amount of wear and tear,” Brown said. Each TARS fully- outfitted aerostat costs the U.S. government $8.9 million.

Aerostats are held in the air by helium. As aerostats gain altitude, the helium expands until it fills most of the aerostat. As aerostats are lowered, blowers pump air into the balloon to help maintain its shape and aerodynamics. The air pressure inside an aerostat is low, allowing it to survive small holes or tears in the fabric. Aerostats are raised and lowered by high-strength cables—the nylon cables used to moor a TARS aerostat can handle 35,000 pounds of tension. TARS sites are classified as restricted flying areas by the Federal Aviation Administration. Like other aircraft, all aerostats are equipped with anti-collision lights.

TARS radar is powered by a diesel generator that also powers the equipment that keeps the aerostat level in the air. The system contains enough fuel for four days of operation. Altogether, the total of the radar, generator, navigation equipment, electronics and fuel amounts to nearly 5,000 pounds.

CBP is also testing the potential of a family of smaller, tactical aerostats for other roles in border security. Tactical aerostats have been transferred to CBP from the Department of Defense following use by U.S. forces in Afghanistan. The aerostats include three models: the Persistent Threat Detection System; the Persistent Ground Surveillance System, and the smallest, the Rapid Aerostat Initial Deployment system. The smaller aerostats operate at altitudes from 500 to 5,000 feet and monitor ground activity with radars, infrared and electro- optical cameras.

The tactical aerostats are similar in design to TARS, but differ in several aspects. Each model can be relocated with portable mooring platforms and towers. All of the smaller balloons are equipped with a radio repeater to retransmit signals from high altitude. This has the effect of instantly boosting communications range for agents on the ground patrolling in flat, poor-reception areas. In addition to radar surveillance equipment, the smaller balloons host infrared and high- resolution cameras that deliver immediate real-time imagery to Border Patrol agents on the ground.