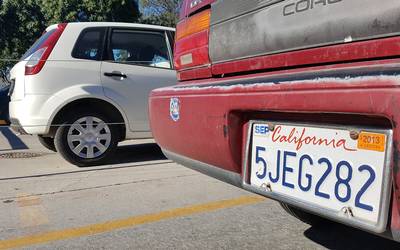 TIJUANA – The city of Tijuana has been handing out 100 chips daily to people who want to register their so-called “chocolate cars,” vehicles purchased in the United States but not registered in Mexico.

Many people south of the border, in cities like Tijuana, keep American license plates on their cars as a way to avoid paying registration fees. And in some cases, no plates at all.

City officials have said they won’t tolerate this anymore and have threatened to impound cars with U.S. plates that aren’t registered.

The drive to register these vehicles could result in the “legalization” of 250,000 of the chocolate cars believed to be driven on a daily basis in Tijuana.

As of this week, long lines could be seen outside a city office where people have been asked to register their cars. As of now, only 100 cars will be processed per day.